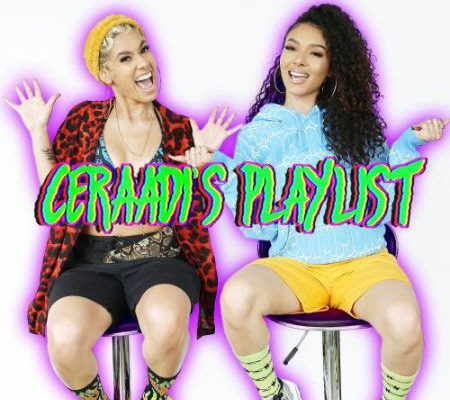 Popular LA based sister duo, Ceraadi, just released their highly anticipated ep; Ceraadi’s Playlist, today. The 5-track EP was created as a gift to Emaza and Saiyr’s loyal supporters also known as the ‘Ceriders’. Ceraadi’s Playlist showcases a dynamic range of singing and rapping over energetic beats reminiscent of the 90’s era. Outside of the sound, Ceraadi wanted to make sure that their lyrics stand true to who they are and inspire female empowerment, self-love and chasing your dreams. “We wanted to give our supporters music that expresses what they’re afraid to say and that it’s okay to love, hurt, hustle, and to unapologetically be you”, Ceraadi states.

The sisters gave fans a sample of what to expect on Ceraadi’s Playlist this spring, as they toured with Fresh Empire performing for the Spring Break Jump Off. They were also seen lighting up the stage during this year’s BET Awards, for the BET Experience. Ceraadi’s lead single off the project entitled, Loyal, garnered well over 1,000,000 views in just three days.

The song, which has a catchy hook and fun laid back vibe, really captured their heart and personalities. Nylon quoted, “They boast unique personalities that perfectly balance each other, capitalizing on their differences and letting their counterpart shine rather than stepping on anyone’s toes. It’s the familial love and trust (they cite their mom as one of their biggest supporters in this journey) that not only keeps them intact through the uphill climb of a music career, but tightens their artistic vision and sound.” Ceraadi’s Playlist truly embodies their spirit and talent and will show the world why their sound sets them apart.

Ceraadi’s Playlist is available on all streaming platforms.